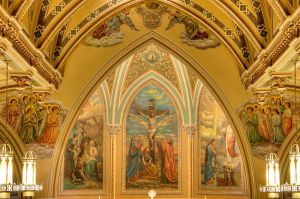 On the second week of the church tour I attended mass at St. John the Evangelist Roman Catholic Church.  This church is only a a couple of blocks from my house in Pittston and I had been there before.

St. John's is another beautiful, beautiful church that is so Gothic revival you could almost believe you just stepped into 16th century France.  The priest seemed approachable and articulate.  And I knew all the words to the service.

I sat in the back with my coat on and kept to myself savoring the relative anonymity of the Catholic mass.  I could come and go here virtually unnoticed I there I thought and I liked the idea of that.  The mass was just how I remembered it, filled with beauty and majesty and the space was perfect.  But I was not connecting.

I tried to conjure up my old feelings about the mass.  I tried to reconnect with the magic and the spiritual power that was once as real to me as the paintings and the statues and the glass.  I remembered how it felt but I just couldn't recapture it.

It was a little like seeing someone you used to be in love with and feeling the closeness and the distance in a single breath.  Sometimes that distance can be closed - depending, I think, on just how bad the breakup was. 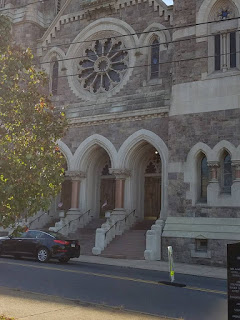 My breakup with Catholcism was a tough one.  And sitting there in church I remembered it.  I remembered leaving St. Mary's of Czestochowa after midnight mass some 15 years ago knowing I would never go back.  I remember how alone I felt and how let down.

Things are different how but just how different remains to be seen.  I do believe that I'll go back to St. John's and, when I do, I promise I'll keep an open mind.  The church does after all, have a lot to recommend it.

Like St. Stephen's St. John's operates under the true spirit of Christian charity.  I admire this very much.


But someone will say, “You have faith, and I have works.” Show me your faith without your works, and I will show you my faith by my works.  James 2:18

About St. John's the Evangelist:  St John's roots can be traced to the 1840s when Catholic priests began to visit homes in the Wyoming Valley to establish a community of the faithful.  The parish of Saint John the Evangelist came into being through the hard work of Father John P. O’Shaughnessy. As the first priest of Saint John the Evangelist parish, he purchased a plot of land on William Street and began the process of fundraising for and ordering the construction of the parish’s first church in 1854.  That same year during the construction of a physical center of worship, Bishop John Neuman of Philadelphia formally established Saint John the Evangelist Parish, providing the Catholic Church’s blessing that the church would be an official spiritual home for Catholics in Pittston.