Scrying and the Bible 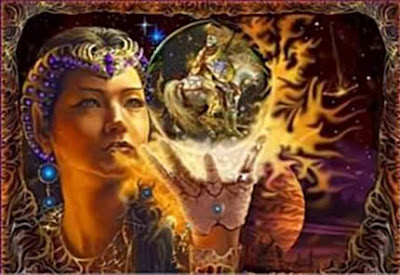 Scrying is the practice of divining through visions seen on a reflective or other smooth surface such as a mirror, polished stone or a pool of standing water.

The word scry (to see) found in reference to divination in several medieval texts including a 1549 narrative calling Thomas Malfrey and an unnamed woman "scryers of the glasse" (Oxford English Dictionary).

But the practice of scrying is much older, going back thousands of years to the land of ancient Egypt as evidenced in the biblical account of Genesis and beyond.

Genesis 44: 1. And he [Joseph] commanded the steward of his house, saying: 'Fill the men's sacks with food, as much as they can carry, and put every man's money in his sack's mouth. 2. And put my goblet, the silver goblet, in the sack's mouth of the youngest, and his corn money.' And he did according to the word that Joseph had spoken. 3. As soon as the morning was light, the men were sent away, they and their asses. 4. And when they were gone out of the city, and were not yet far off, Joseph said unto his steward: 'Up, follow after the men; and when thou dost overtake them, say unto them: Wherefore have ye rewarded evil for good? 5. Is not this it in which my lord drinketh, and whereby he indeed divineth?
.

The use of the cup, while probably part of the "trick" Joseph played upon his brothers, is an obvious reference to scrying.  One that Joseph expected his family, who were from far away Canaan, to understand.  It seems likely that scrying was known in the ancient middle east and can be found in other sources such as the Persian Legend of the Cup of Jamshyd in which, it was said, the entire universe could be seen. 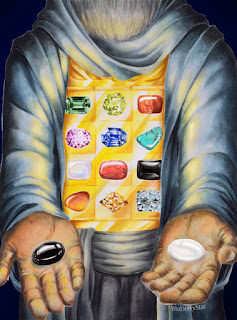 Divining by direct use of a physical object was undoubtedly performed by the ancient Israelites through the use of a pair of mysterious objects, called the Urim and Thummim.  Carried in the breastplate of Aaron (Exodus 28) and subsequent high priests of Israel, these objects were used to answer questions of great importance but are never described.

Unfortunately, scholars are not in full agreement in regard to the linguistics making it difficult to speculate about the way they were used but it's likely that using these items was a variant on the ancient practice of casting lots which is still used today when working with the runes.

Moving forward into the book of Exodus, a possible, albeit tenuous, association between pooling water and biblical prophecy appears in the story of Miriam, the sister of Aaron and Moses, called Miriam the prophetess (Exodus15:20).

Though no details of Miriam's prophecy in the biblical narrative, Jewish oral tradition (as contained in Sefer Ha-Aggadah) tells several such stories.  It also tells of the Well of Miriam.  Traditionally described as a literal portable source of water, which followed the Israelites through the desert for the forty years of their wandering. We are not told how transporting this portable well is done or why the well was associated with Miriam.

Did Miriam, or any other biblical figure for that matter, scry?  The research is, as I see it, inconclusive.  The cup of Joseph was I think, only a cup, and we have no idea how the Urim and Thummim of the high priests of ancient Israel were employed.  The Well of Miriam, while fascinating, seems to me a remnant of a story told outside of the biblical text as we know it today.  I consider it a mystery that is almost certainly lost, and probably best understood symbolically.

Update:  Although I wrote this story several years before I considered myself a Christian, I find it interested that (as open to scrying as I undoubtedly was) I just couldn't buy the New Age claims I had heard that scrying was accepted in the Bible!
8:36 PM
Barbara Graver
bible, prophecy, scrying