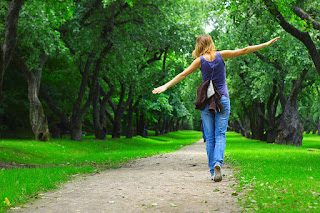 This morning I saw that a reader had commented on a chakra series I wrote in 2012, telling me they'd enjoyed the article.

I have a long history of receiving guidance through comments on the blog so I decided that I should revisit those old posts.  One post in particular (on the solar plexus chakra) made me think about my connection to spirit and the confidence it takes to share that experience with others.

I hadn't thought about this blog in terms of confidence building for a long time but as I reread the solar plexus chakra post I remembered how, in the beginning, the idea of posting and making videos and talking on internet radio was a very scary thing.  I remembered that I didn't want anyone I really knew to find out that I was doing it and that this was why I decided to use an old family surname name and keep my posts to myself.

Not sharing the content of my blog wasn't hard for me.  I had been keeping my interest in tarot and the paranormal and all things occult to myself for quite a while.  To just keep on doing so suited me just fine.

I didn't do social media or in any way promote those first posts and I sometimes found myself hoping that no one would read them.  But despite my reticence I did want to share.  Partially because I felt isolated, perhaps, but mostly because I believed that spirit had encouraged me to do so.

My take away from all of that was that I should write a spiritual book and that this blog would help me find the confidence to do so.  This, as it turned out, was easier said than done.

Somehow writing a spiritual book never felt quite right to me and every attempt I made at a manuscript seemed worse than the one before.  At first I thought that this was because I lacked confidence and then I thought it was because I needed to evolve.  I worked hard at evolving but the book still didn't come and as I traveled from 53 to 57, I worried that it never would.

And then, in my 58th year, something funny happened.  I began to see the blog not as a stepping stone to something else but as an end in and of itself.  It occurred to me that I could share on spirit in a blog just as well, and maybe even better, than I could in a book. It seemed to me that I should just take a breath and continue to do what I'd been doing.

Released from my own expectations, I began to reconnect with old (and new) things I liked to do.  I dug out my old my fiction manuscripts and began to edit and, before I knew it, new ideas were coming.  I found my old drawing box and bought myself a sketchbook and then I did a sketch.  I decided I might like to make artsy-crafty things to sell in my online shop and that I might want to train in astrology and attempt a full length work of fiction or spiritual non-fiction when I was ready.

At the time, these small decisions didn't seem like any sort of step in any particular direction.  But this morning it occurred to me that the person who had written those old posts about the chakras, the person trying so hard to evolve, the person so stuck on what she wasn't that there was always something between her and the person she wanted to become, had undergone a very quiet transformation.

I thought about the book I read this week on the practice of magic and about how the most important step in that direction is to know yourself, to know who you are, and who you are not. And I thought, I've got that.