A Butterfly in Flight 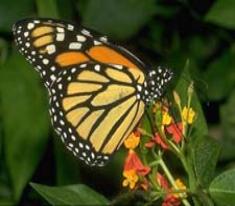 On Sunday I stopped at a convenience store so my son could use the ATM.  After he got his cash he stood looking down at something on the sidewalk while the other shoppers rushed around him, some obviously annoyed.

When the coast was clear he came back to the car and said that there was a butterfly on the ground that  seemed unable to fly.

Thinking that the butterfly was probably injured and that a convenience store sidewalk was a really awful place to die, I got out of the car to see what I could do.

The butterfly was big and beautiful and very yellow.  He didn't seem to be injured or at least if he was we couldn't see how. But he there was no doubt that he was not about to fly.  I watched him crawl around in circles for a moment, while the Sunday shoppers streamed back and forth, and then I put down my hand and let him crawl on board.  His little feet were surprising soft and I could feel his delicate gentle energy as he circled comfortably on my palm.

Walking around to the side of the store we were surprised to see that someone had made a small landscaped garden in the area between the shop and the lot.  So I put the butterfly down on a bush, even though he seemed as if he wanted to stay right there on my hand, and then we drove away.

We drove the next few blocks to the 6th Street Flea Market wondering if the butterfly might have not been injured at all but simply new to life as a butterfly and not quite ready to take flight.  I told my son about a cocoon I had kept as a child and how the moth emerged and sat for a long time on the edge of the open jar as if he didn't quite know what to do.

I had thought the moth was sick so I gave him bits of broken leaves to eat and a soda cap of water and laid down on the grass and waited.  After what seemed like forever, he finally spread his wings and flew away, small and brown and sturdy against the bright blue summer sky.

It was one of those moments in childhood.  The kind you don't forget.

Now, almost half a century later, my son and I couldn't help wondering if the big yellow butterfly might just have needed a bit of time to get his bearings.  It was a breezy day and probably not the best time for a first attempt at flying.  Or perhaps he had been flying and got tossed about in the storm the night before.  Either way, we speculated, he might have remembered his old safe caterpillar life and decided to take a time out on the ground.

We arrived at our destination and got out of the car.  At that very moment, a bright yellow butterfly came dipping and weaving across the windy parking lot.  As he passed almost directly in front of us, I had the distinct impression that he was saying, "Look at me,  I've got it."

My son and I exchanged a look.  "I'd like to think that's our butterfly," he said.

"So would I," I said feeling surprisingly certain that it was.  And I felt happy for the butterfly and happy for us as well.

There is nothing particularly memorable about a busy convenience store parking lot or a morning at the flea market.  But sharing the trust of a butterfly with a family member who is so like you it's suprising is something very special.  Special enough to become one of those moments.  The kind that you remember.  The kind you hope to share.