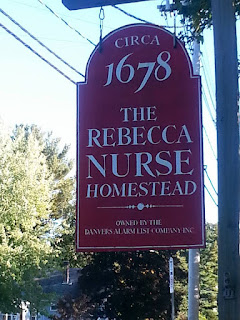 Last October, right around this time, I visited the homestead and grave site of my great...great aunt Rebecca Nurse.

Rebecca was the last "witch" to be hung as a result of the infamous trials in Salem Village (now Danvers, Massachusetts).  She was 71 years old, in ill-health and so hard of hearing that she could not respond correctly to the questions she was asked.

The evidence against her came in the form of "spectral evidence" or psychic "apparitions" perceivable only to her accusers.  Such evidence was allowable under English law in the trial of accused witches only.  Other special legal conditions granted in English witch trials included the testimony of children, statements of sworn enemies, and evidence presented by those who owed money to the accused.

After readings my great aunt's testimony and Shirley Jackson's wonderful book, The Witchcraft of Salem Village

, I feel certain that Rebecca did not have malicious bone in her body and was absolutely innocent of the "spectral torture" of the young girls who testified against her.  Instead, she was a gentle warm-hearted woman, loved by her family and community, less vulnerable to slander than many of the accused but a victim nonetheless.

She was not, of course, the only only one to suffer.

Of the 200+ people (most of whom were women) accused at Salem, twenty were put to death.  Nineteen of these twenty, including Rebecca and her sister Sarah, maintained their innocence right up to the time that they were hung.  A single victim, Giles Corey, refused to speak throughout his trial (because a plea would lead to forfeiture his land) and was, for that crime, sentenced to be crushed to death by heavy stones.

Rebecca was remembered for her courage on the gallows. I like to think that, as a Christian, she held a strong conviction that she was going to a better place - and that this was a place her accusers were unlikely to see.  Even so, the months of hardship and dread in a primitive prison and the ultimate terror of Gallows Hill must have been almost impossible to bear.

Seeing Rebecca's home and the beautiful farm she and her family carved from the wilderness was a moving experience.  Just that morning we had been in Salem proper walking with the crowds, smiling at the costumes, and enjoying the many witch-themed shops.  The night before, I had stood with an large, boisterous group of people,  in the center of town, taking photos of the Samantha Stevens statue - enjoying the high spirits and outright celebration of all things witchy.

Walking the same path Rebecca walked so long ago, however, made me see all of that in a different, and unexpected, light.

The most conservative of estimates tell us that an estimated 100,000 people, and most likely more, were put to death as a result of the witch hunts that spread across Europe and the colonies in an approximate three hundred year period (1450 to 1750).  While some of these people did practice some version of the Craft, all were innocent, in my opinion, of the curses and murders of which they were accused.

That such a thing could happen in a so-called civilized society is a sad testament to intolerance and hatred and Salem is often criticized for capitalizing on what were, by any definition,  cruel and tragic acts.  While I thought that visiting Salem might make me feel that way as well, I found myself left with very different point of view.

From the perspective, celebration is a good thing and tolerance is a blessing - however it is born. And the freedom that anyone now has to walk the streets of Salem, cloaked and hooded and entirely themselves, is a clear indication of better things to come!